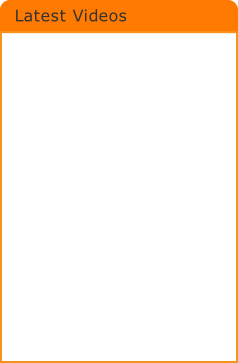 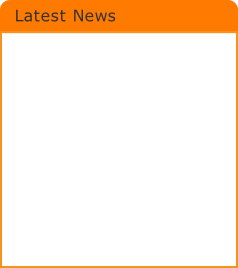 Check out these amazing eco-friendly wooden maps. They are precision cut, and can even be illuminated .

A Family Trip to the Lake District 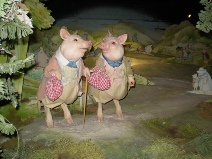 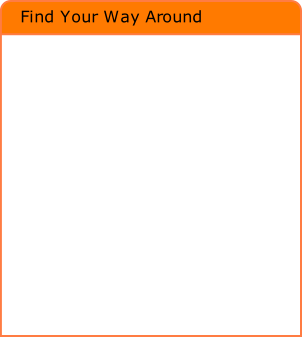 Relaxing on the moonlit terrace, enjoying a superb meal, with the waves of the Adriatic lapping against the shore just below us, it’s hard to imagine a more perfect setting. A classical guitarist serenades our party, as the lights of Dubrovnik twinkle across the bay. But just twenty years ago the lights were far less inviting.

The Hotel Libertas, on the outskirts of this historic city, had a grandstand view of the shelling that rained down from the Yugoslav forces in the mountains above. Then, on December 6th 1991, this once beautiful hotel actually became the target, as shells burst through the roof, and gutted large parts of the complex. The terrace on which we were now sitting was cratered, and covered with debris. As the war progressed, the remains of the hotel were used to house refugees, although as a memorial in the car park now attests this was still by no means a safe haven.

Once peace was restored the site lay abandoned, the the balconies and foyer overgrown, and the rooms full of rubbish. And yet the idyllic location still attracted those wanting to swim and sunbathe.

It’s just one story that is be repeated countless times across the city. Despite the damage, the people gradually returned to discover a Dubrovnik that had lost nothing of its perfect charm. The waters of the Adriatic were still the same glorious blue, the narrow streets were still as enticing, an array of pretty boats bobbed up and down in the harbour just as before, and of course the sun still shone.

The Libertas Hotel has now undergone a massive rebuild and renovation, & is under the wing of the Rixos Hotel group. The transformation is amazing, and without doubt it is probably the best place to stay if you are visiting Dubrovnik. The rooms are large, bright, and well appointed, with flat screen televisions that pop up at the touch of a button. The open plan layout of the rooms may not be to everyone’s liking, but that is more than offset by the unbeatable panoramic sea views. 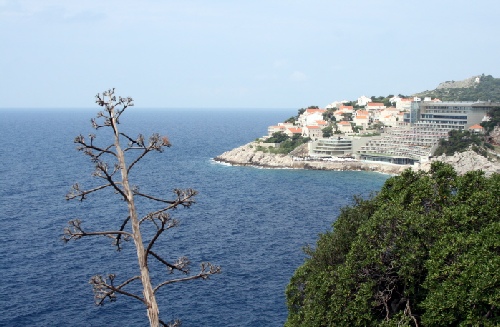 There are no less than five bars, and a choice of places to eat – and you will want to try them all, as the cuisine is first rate. But this is a place to relax. Indoor and outdoor swimming pools, large sun terraces, gardens, and a superb relaxation and wellness area will see that everyone will have the best opportunity to feel completely refreshed. Of course you can also swim in the sea, as an area directly in front of the hotel is marked off & kept immaculately clean for guests. Just  to watch the man diving with his basket, collecting loose bits of seaweed was a first for me!

In the evenings, try the casino or nightclub, or just sit back and enjoy your drinks on the terrace overlooking the bay, as you are gently fanned by the warm airs of the Adriatic. In many resorts, the hotel is just somewhere to reside while you explore the region. Here, however, the hotel becomes part of the experience.

It’s also in an ideal position, just 15 minutes walk into the city, yet that is far enough away to be secluded, quiet, and unaffected by the crowds that herd off of the cruise ships each morning.

Those crowds can be a problem. If possible, it’s best to leave a visit into the walled city until the afternoon, when they’ve all either returned to their ships, or departed on coach tours.

Walking the streets of the ancient city is a joy, however, and certainly one to be enjoyed at a

leisurely pace. A walk around the top of the city walls, or at least the southern half, is well worth the few Euros it costs. It can be a bit nerve-wracking in places, but the views both across the city, and out to sea are breathtaking. The main entrance is just inside the main gate, and buy tickets by Big Onofrio’s Fountain. 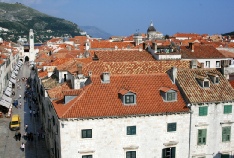 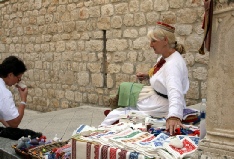 Dubrovnik was once a major player in the sea trade of southern Europe, at times even rivaling Venice in importance. It was protected as a kind of neutral City State, basically by being everybody’s friend, at the same time as spying on them all! Nowadays, it’s the churches, cathedrals, and myriad of other significant historic buildings that draw visitors from around the world.

The long main street, or Placa, with its marbled paving slabs gleaming in the sunlight, is awash with ice cream parlours and gift shops. But step into any of the intriguing narrow side streets, and it’s easy to imagine you are stepping back in time. Steep steps lead up past overhanging buildings, with washing lines stretching between them and women chatting from window to window.

Back on the tourist trail, the Dominican Monastery also houses a small but informative museum. There are some interesting artefacts, although much was apparently plundered during the Napoleonic era. The Emperor was not known for his love of monastic buildings, of course, and whilst his troops were the occupying force here the monastery was used as stables for his horses. On the walls around the central courtyard there is still evidence that stones have been hollowed out to hold water for them.

As you walk under the tall bell tower, a small square in front of St Blaise’s church is the start of the other main street, Pred Dvorom. This is fronted by impressive buildings such as the City Hall and the Rectors Palace, and leads along to the Cathedral. Mid way along, take a diversion up the Od Puca, to the lively market in Gundulic’s Square. This is where you’ll find the best bargains, although to be fair Croatia is still amongst the best value for money of all the Mediterranean countries anyway.

The Old Port is one of the most popular places to wander. With a mixture of traditional and modern craft, the whole place has a kind of timeless air about it. It’s surrounded on three sides by high walls that once protected the city, but today serves once again as a busy working harbour. Small boats take groups of tourists along the coast, or out to the Islands of the Dalmatian coast. Experience a glass bottomed vessel that allows you to enjoy the crystal clear waters - and all that lies beneath.

With such a maritime heritage, it’s no surprise that seafood is high on the menu for most of the area’s better restaurants. If you’re not too confident with oysters, mussels, squid, and the like, then this is the place to try them. They’re unlike most others I have tasted, and have a far ‘softer’ quality which was particularly enjoyable. Croatia is known also for its excellent wines, of course, and you don’t need to travel far outside Dubrovnik to see the hills lined with vineyards.

Back on the warm, moonlit terrace at the Hotel Rixos Libertas, as it is now called, we were happily enjoying the seafood, and the wine. The old Napoleonic fortress on top of the mountain is now nicely lit, alongside a huge, thought-provoking cross. There is a feeling of ‘forgive and forget’ amongst the Balkan people that I spoke to. The emphasis is on attracting visitors back to see for themselves that this is still a region with plenty to offer.

Those with long memories of European travel will recall how popular the former Yugoslavia used to be for British visitors. It won’t be long before 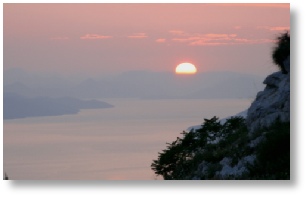 the masses ‘rediscover’ it, so the smart advice - I would suggest - is to plan your trip soon. 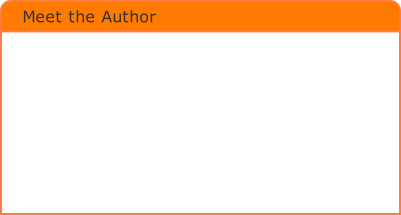 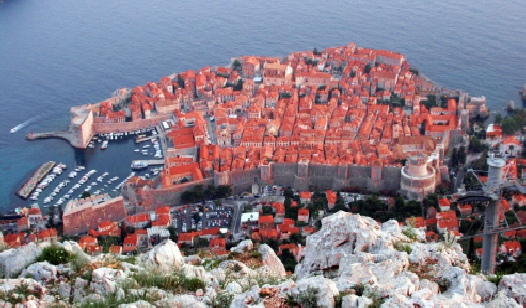 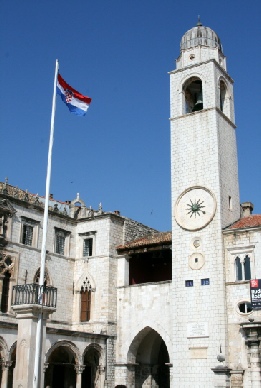 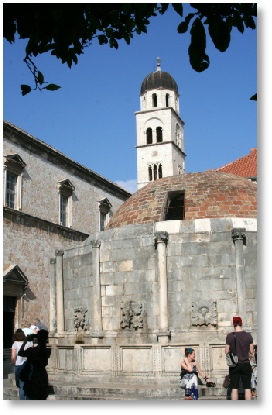 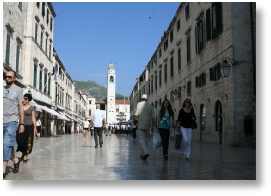 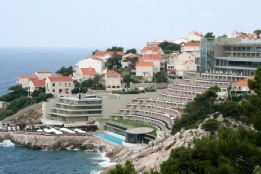 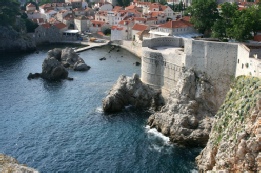 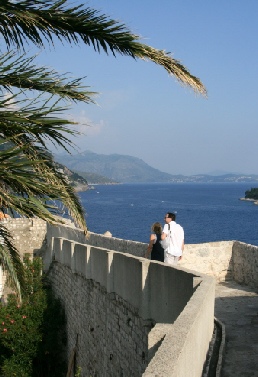 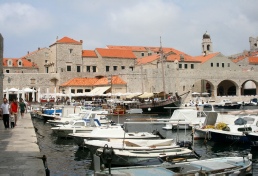 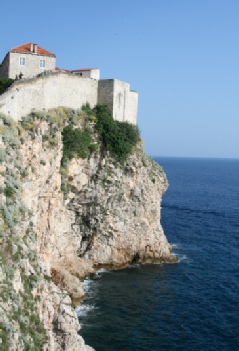