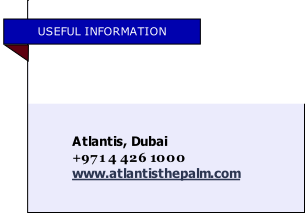 Atlantis, The Palm, in Dubai, is set to revolutionise the water park landscape with the expansion of Aquaventure. The innovative development includes a number of world firsts, including the world’s largest diameter slide, the world’s first vertical family ride, and the first double slide within a slide experience, allowing tube riders to watch fellow ride sliders in action, suspended above them.

Aquaventure will also be home to the longest zipline circuit in the Middle East and the first to be integrated into a waterpark tower, with riders flying high above the waterpark and Aquaventure Beach, enjoying spectacular views out over the resort and The Palm.

Already the biggest waterpark in the region, Aquaventure will be unveiling the 40 metre high The Tower of Poseidon and the longest river ride in the Middle East, measuring 2.3 kilometres in length. The river will incorporate tidal waves and pools, water rapids and white chargers, along with 700 metres of stunning white sandy beaches overlooking The Palm.

In addition to the waterpark’s exciting developments, Atlantis, The Palm will also be offering a variety of new dining experiences and remains the only waterpark in the region to offer animal encounters including Cownose Ray Feeding, Shark Scuba Diving, Dolphin Encounters and Shark Safaris in a shark-infested lagoon.

Commenting on the new developments at the resort, Alan Leibman, CEO of Kerzner International stated: “Kerzner International has always been focused on innovation, to create new and unique guest entertainment experiences. This upcoming expansion will be more exhilarating than anything we have unveiled before, with unbelievable new rides the likes of which haven’t been seen anywhere in the world.”

Atlantis, The Palm is the first entertainment resort in the region, and located at the centre of the crescent of The Palm in Dubai. Opened in September 2008, the unique ocean-themed resort features a variety of marine and entertainment attractions, as well as 17 hectares of water-scape amusement at Aquaventure Waterpark, all within a 46 hectare site.

It is home to one of the largest open-air marine habitats in the world, with over 65,000 marine animals in lagoons and displays including The Lost Chambers Aquarium, a maze of underwater corridors and passageways providing a journey through ancient Atlantis.

Aquaventure features 18 million litres of fresh water used to power thrilling waterslides, a 2.3 kilometre river ride with tidal waves and pools, water rapids and white water chargers. Dolphin Bay, the unparalleled dolphin conservation and education habitat, was created to provide guests a once in a lifetime opportunity to learn more about one of nature’s most graceful mammals. 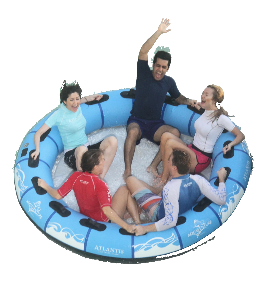 Atlantis, The Palm is also known as the culinary destination in the region with a collection of world-renowned restaurants including Nobu, Ronda Locatelli and Rostang. The resort boasts an impressive collection of luxury boutiques and shops as well as extensive meeting and convention facilities.